Additional Precautions Taken on Hamilton Avenue and on North Berm 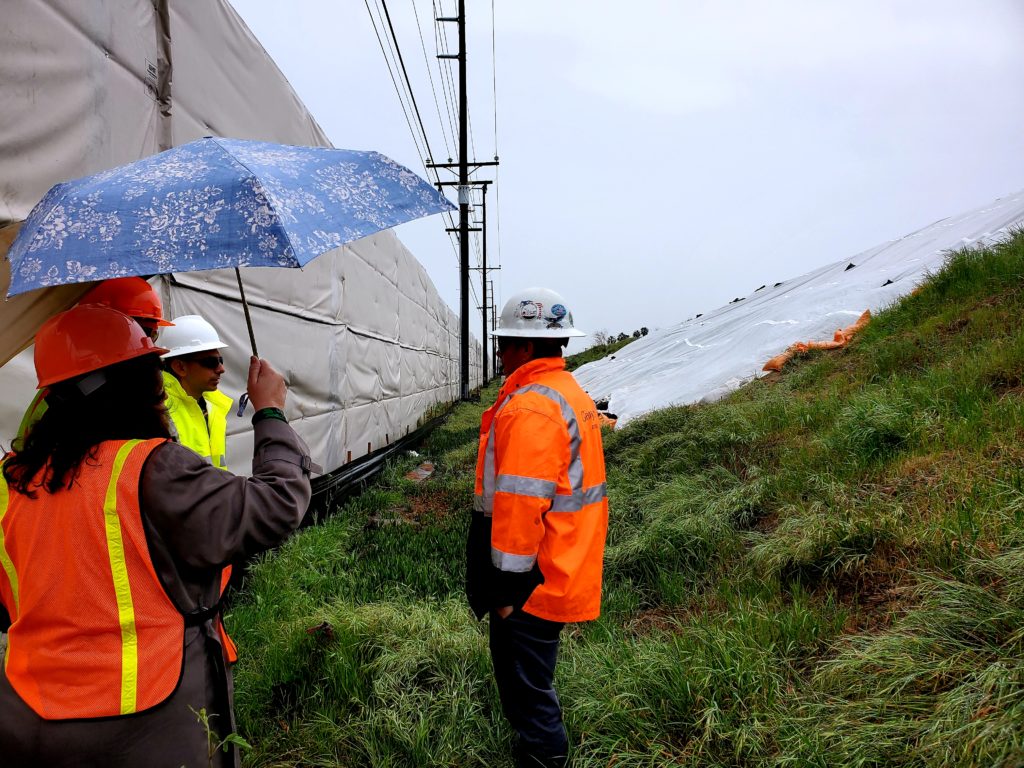 Huntington Beach city and fire department officials joined the Ascon team on March 12 to inspect and discuss contingency planning for the North Berm. The berm area experiencing tension cracks currently is covered as a safety protocol during rain.

A condition known as tension cracking is being monitored along the earthen berm parallel to Hamilton Avenue, known as the North Berm. This area of the 70-year-old berm is unexcavated and is approximately 20-feet in elevation from street level. Ascon’s technical team considers this area a medium to high risk for potential slope failure, and has instituted 24-hour inspection to track cracking and settlement.

The tension cracks are a result of the age of the berm (over seven decades), the shifting physical load on the berm from partial excavation of the Site prior to work suspension last June, and weathering during rain events. Weathering or cracking of aging earthen berms is a condition that can be found at many landfills around the country. There are tested technical options to minimize or eliminate the issue.

Potential berm repair or stabilization options have been submitted to DTSC for review and direction. During the interim while the Ascon team awaits DTSC’s direction, reinforced plastic sheeting is placed over this area in advance of rain. This precaution was implemented after the first observation of cracking and subsequent notification to DTSC in early January.

Recent inspections of the berm have been conducted with DTSC and City officials, including an onsite contingency planning discussion with City and fire department representatives. The Ascon team plans to place water filled barriers (k-rails) in the shoulder area of Hamilton Avenue adjacent to the 16-foot barrier fence, just east of the Site driveway and continuing east approximately 500-feet to prevent pedestrian and bicycle access adjacent to the Site. Flag persons will be present during this activity for traffic safety.

An emergency plan is in place and the Ascon team will continue 24-hour inspections and weather mitigation actions. An update will be provided when direction is received from DTSC on the next steps.